Researchers at Stanford University have used 3D printing to develop a strain sensor that enables the wireless monitoring of tumor regression in cancer patients.

Composed of a 50-nm layer of gold, drop-casted onto a flexible polymer enclosed within a 3D printed housing, the device is designed to be wrapped directly around tumors. Once situated, the team’s stretchable sensor expands and shrinks as tumors progress while gathering data, in a way that could provide doctors with a low-cost, scalable new way of assessing how patients respond to treatment. 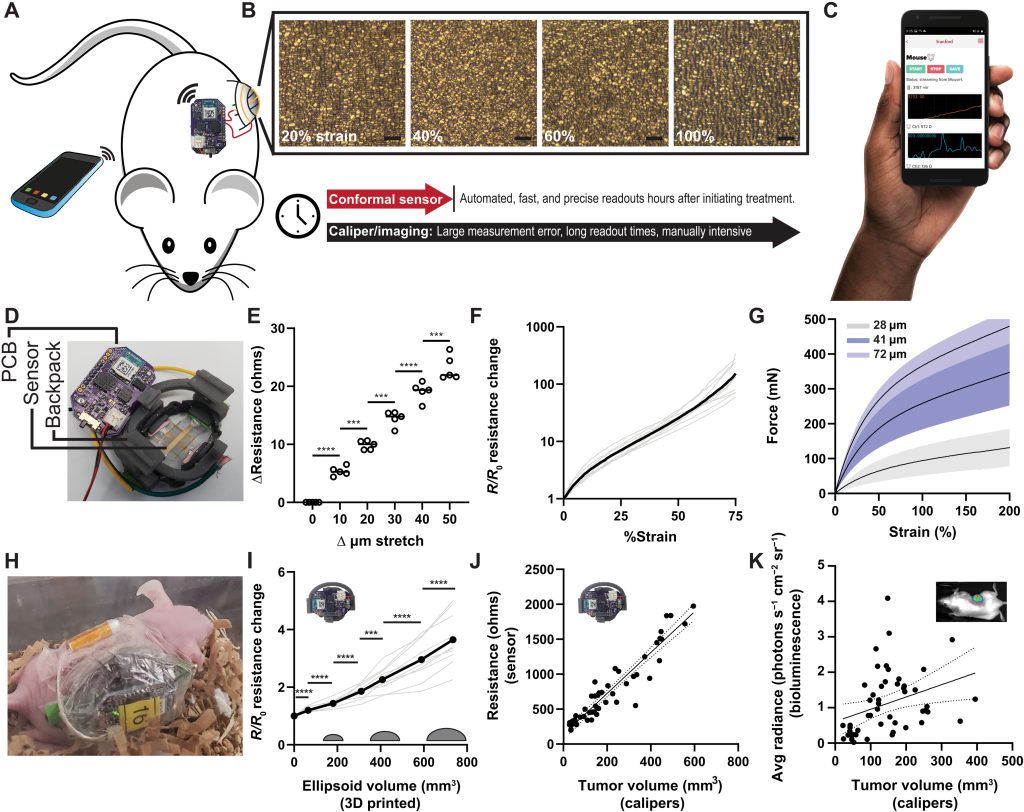 Clinical translation, a process in which scientists seek to apply lab findings on a disease or potential treatment within human studies, can be arduous to say the least. Through this trial and error approach, the Stanford team say “thousands of potential cancer drugs are tested for every one drug that makes it to patients.”

Currently, to assess such cancer treatments, oncology researchers deploy a suite of high-throughput screening models. Often involving the use of algorithms alongside genomic testing, cell culture and organoid systems, these are capable of evaluating the efficacy of several drugs quickly against a given type of cancer.

That said, in-vivo models tend to yield results that more closely resemble clinical outcomes, as testing with them allows for the comparison of tumor growth between replicates of treated and untreated controls, but biological variation, low-resolution and small sample sizes still make adopting them tricky and expensive.

Given that “determining treatment response is critical to clinical translation,” the Stanford team say developing a tool to automate this process could enable the “gathering of high-resolution continuous datasets.” In their paper, the scientists add that such data quality and automation advances may even eventually unlock “high throughput in-vivo drug testing setups.” 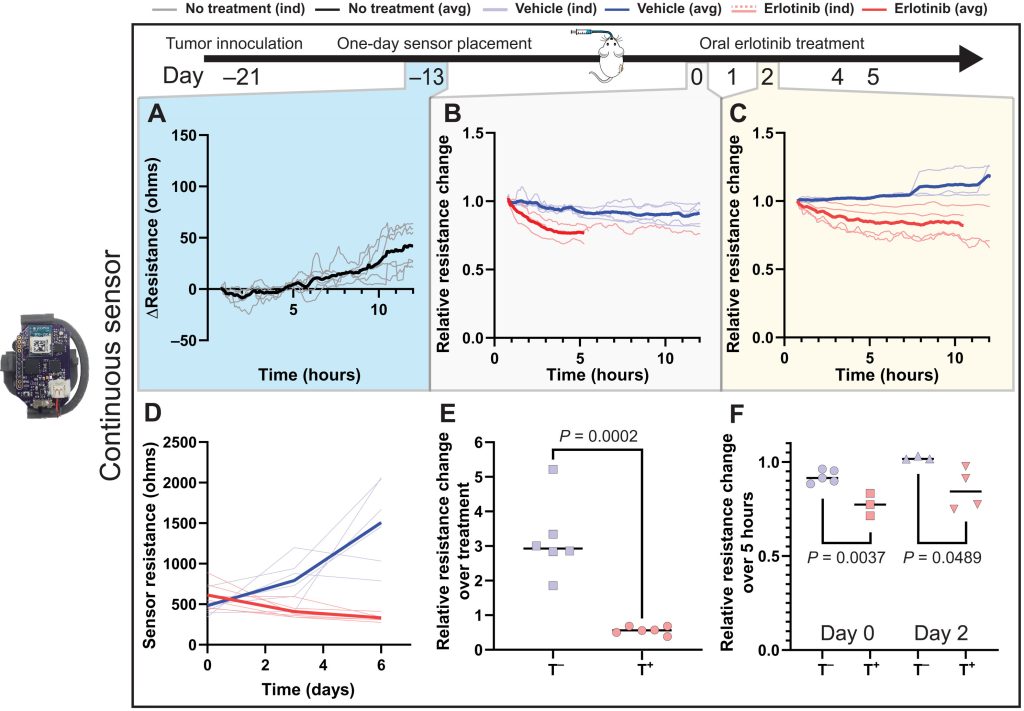 To improve the efficacy of in-vivo tumor-sensing, the Stanford scientists have come up with a flexible autonomous sensor measuring tumor volume regression, or ‘FAST’ technology. The team’s process is based around a sensor, made from gold layered onto an elastomer, that’s designed to grow or shrink in tandem with tumors.

When it does so, microcracks occur in the device’s gold layer, causing parts of its surface to lose contact with each other, and for the tortuosity of its electrons to increase. These changes can then theoretically be monitored via a custom PCB and mobile app, and initial testing showed that at a strain of 0-75%, their sensor was capable of detecting size differences down to a 10-μm resolution.

3D Printing with over 100 materials, shipping globally with competitive low cost, get quotes for your projects now!

While the scientists’ sensing tool can be applied internally or externally, they went on to assess its efficacy in-vivo within a mouse test subject. Held in place via a 3D printed housing mechanism, designed to allow it to accurately track tumor volume changes, the sensor proved capable in these tests of identifying differently-treated tumors in a space of just five hours.

What’s more, when deployed over a week, each cheap and easy-to-construct sensor demonstrated the ability to consistently and accurately measure tumors via resistance variations. As such, the device’s developers say it could now “expedite and automate the process of screening cancer therapies,” while “eliminating the need for guesswork” around their efficacy. 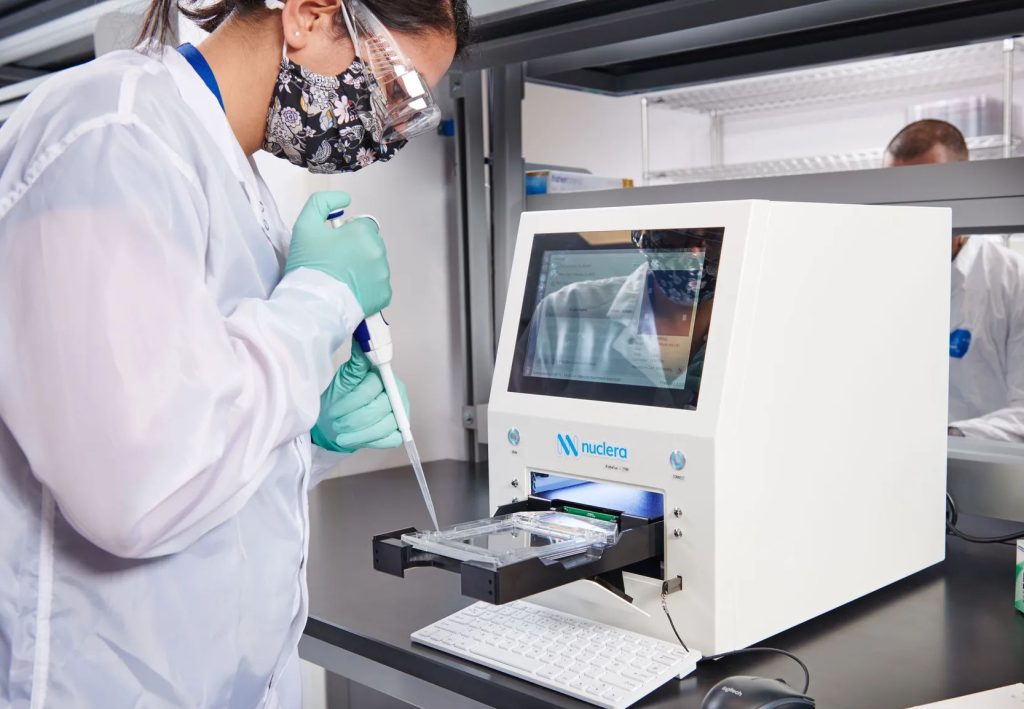 A scientist using a Nuclera 3D bioprinter. Photo via Nuclera.

Accelerating drug discovery has also become one of the main target applications of emerging 3D bioprinting technologies. Earlier this year, start-up Nuclera raised $42.5 million towards the launch of a new eProtein drug discovery 3D bioprinter, designed to produce the samples needed to study protein-to-protein interactions, and gain a better understanding of deadly diseases.

Prellis Biologics, meanwhile, attracted $14.5 million in Series B funding in December 2021 to support its development of a novel drug discovery platform. As the firm’s EXIS 3D bioprinted lymph node is capable of breaking the natural cell failsafes that prevent auto-antibody development, it could soon expedite therapeutic R&D.

Scientists develop 3D printed glasses with the potential to cure color blindness: Composed of tinted lenses housed in MSLA 3D printed frames, the team’s eyewear effectively works by blocking out undesired wavelengths while staying transparent to the rest of the visible light spectrum.