How to Design 3D Printed Hinges

The first principle to keep in mind when designing a living hinge is that it needs to be the weakest area of the part. If the living hinge is roughly the same thickness as the rest of the geometry, then the part will distort and flex when attempting to use the hinge.

The force needed to bend a hinge is proportional not only to the thickness of the hinge, but also its width. Consider the possibility of modifying a hinge to several smaller hinges. For example, turning a 0.8 in. hinge into three 0.2 in. hinges and leaving 0.1 in. in between each hinge will not only extend the functional life of the part—if one of many hinges eventually fails, the part may still be usable—but could also improve the performance of the part. That’s because less force is needed to operate the hinge and therefore less stress is placed on the clasps, snaps, and the geometry as a whole.

Note that a living hinge will act somewhat like a spring and will exert constant tension on the snaps, clasps, or whatever fastener is holding the part in the flexed position. These fasteners need to be robust enough to oppose the spring-like force of the hinge. 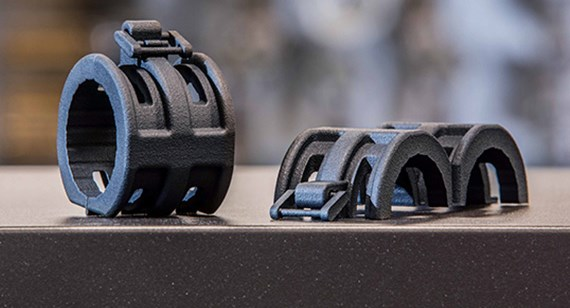 We recommend using Multi Jet Fusion for 3D-printed parts with living hinges due to the technology’s minimum feature size of 0.02 in.

When 3D printing parts with living hinges, the most suitable nylon material is PA 12 available in MJF. Hinges can also be made from SLS materials PA 850 Black, and less preferably PA 650, however they will most likely have a shorter lifespan and greater care will be needed in designing them as well as the surrounding part.

We recommend avoiding PA 614 and PA 620 MF for parts with living hinges as the nylon is too stiff and will snap rather than bend. And while you could technically build a living hinge in an elastomer like TPU, the material will rarely be appropriate for the rest of the geometry.

How to Calculate Living Hinge Length

Living hinges are under constant stress when in use. One side of the hinge is under compression, while the other side will be under tension. Because of this, living hinges should be as thin as possible. This means that the thickness of the hinge should be the minimum feature size of the technology (0.02 in. for MJF and 0.03 in. for SLS). This is one of the reasons why MJF is the superior additive manufacturing technology for living hinges.

The formula L=πR is the ideal relationship between hinge length and placement. This allows the hinge to form a semicircle when in the closed position. Following this formula will evenly distribute the stress along the hinge and minimize stress at the attachment points. The following image demonstrates the relationship between hinge length and placement. 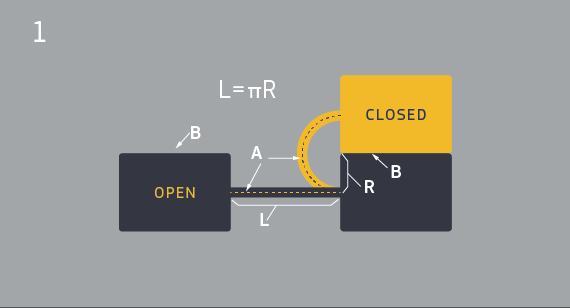 With these concepts in mind, we have found that MJF can build living hinges with good results after annealing down to length L=0.05 in. using the formula L=πR. Meaning that the minimum distance for R in the formula is 0.016 in. Due to how the outside of the hinge stretches relative to the center line of the hinge, smaller hinges (shorter length in the formula L=πR) put more stress on the material than larger hinges.

Larger hinges will put less stress on the material, and will therefore tend to have a longer lifespan. However, at some point the hinge becomes too large and may actually decrease the functionality and aesthetics of the part simply because of the size of the hinge feature.

A Formula for Right-Angle and Other Living Hinges

Up to this point we’ve only discussed hinges that have had a bend of 180 degrees; however, all of these principles can apply to any degree of bend, like a 90 degree hinge, for instance. So what’s the general rule for hinges of all bends?

But since this gives the correct answer for a bend of 180 degrees, we need to take into account how much of 180 the bend degree in question is. In other words, we need to divide it by 180. A formula that can be applied to all bends is L=(Bend°/180)πR.