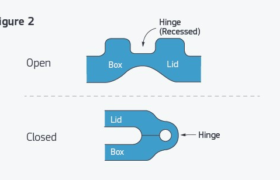 Living hinges are those thin areas in a plastic part along which the part can fold. They are often used to produce a container and its lid as a single molded part, and if properly designed they can open and close thousands of times without ever losing strength or flexibility. The concept is simple, but we are asking a great deal of a very small section of plastic. In a typical application, a hinge can flex through an arc of 90 or 180 degrees, but arcs of 270 or even arcs that approach 360 degrees aren’t entirely unheard of. Whatever the arc is, we expect the hinge to perform over and over again without losing its strength. Poorly designed living hinges—much to the frustration of the product developer or end user—may function a few times before they begin to break down or they may actually prevent two hinged parts from meeting as they should. Well-designed living hinges can operate as neatly and smoothly as any metal hinge, and they can last the life of the product. 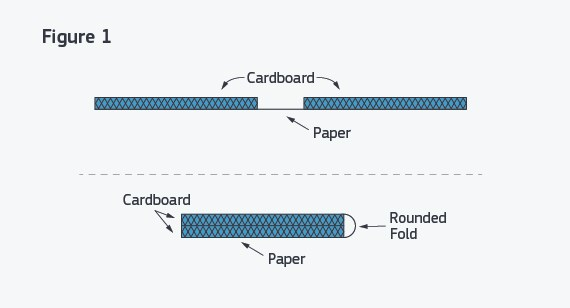 Figure 1 shows how a paper and cardboard hinge would work.

Several factors influence the performance of a living hinge. The first is the material itself. Brittle resins like polycarbonate simply aren’t suitable for hinges. On the other hand, very flexible resins like TPE might make great hinges, but lack the stiffness to form the rest of the part. The most popular resins for parts with living hinges are polypropylene and polyethylene, both of which balance stiffness in thicker areas with flexibility where the resin is thin. 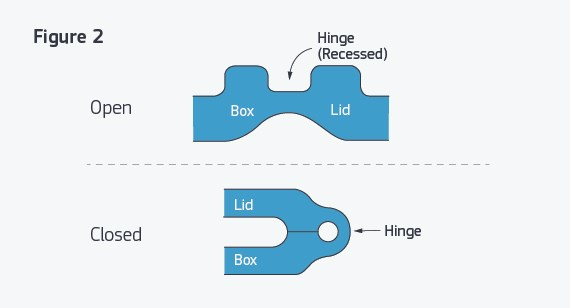 Figure 2 depicts how a plastic hinge would work by slightly recessing the living hinge.

Other factors that influence the performance of a living hinge include the thickness of the hinge itself (thick enough to be strong, thin enough to be flexible) and the radius of the bend (a thinner hinge can bend through a tighter radius without being damaged).

In some cases, this balancing act isn’t very challenging. Take for example the strip of plastic that connects the spout of a squeeze bottle to its cap, keeping the cap from getting lost. It’s called a tether strap, and while it technically isn’t a living hinge, it performs a similar function. A typical tether strap is thicker than most living hinges so it’s strong, and it bends through a very large radius so there’s no risk of damaging the resin as the strap bends. The living hinge on a plastic toolbox, on the other hand, is thin, and the two surfaces it connects essentially lie flat against one another when the box is closed, creating a tight bend in the hinge. This makes the challenge of hinge design much greater.

A simple way to demonstrate how living hinges work or fail is with a thin piece of paper. Fold a sheet of paper loosely in half, but don’t press down to crease it where it is bent. This is what happens to a living hinge with an acceptable bend radius. As long as you leave the fold in the paper round, you can bend and unbend it as many times as you wish without weakening it. However, if you want the folded paper to lie flat for insertion into an envelope, you will press it flat to create a crease. You have now permanently changed the structure of the paper. Under a microscope, you could see broken fibers where it was creased, and if you try to tear the sheet, it would probably tear along the weakened crease. 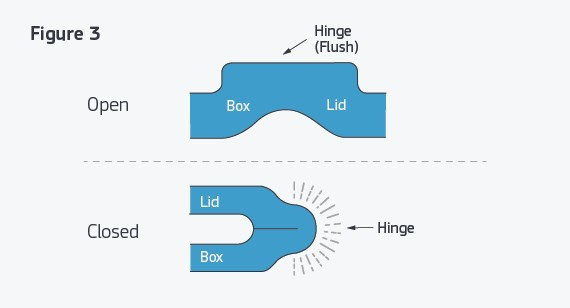 Figure 3 illustrates what would happen to a plastic hinge that is not recessed.

Starting again with that loosely folded paper, you can feel resistance as you press gently on a fold. You might even have a sense of how far you could push before the crease becomes permanent. Use thinner paper and you can press farther before weakening its structure. If you use thicker paper or light cardboard, the resistance is greater and so is the radius at which permanent deformation occurs. This is the same thing that happens with a plastic living hinge. But the question for both paper and plastic remains: How do you get the surfaces being folded to lie flat without damaging the hinge?

With paper, you could do it by raising the mating surfaces above the level of the hinge, say by adding sheets of cardboard to them (see Figure 1). This ensures that when the paper is folded, the cardboard surfaces lay flat against one another while the paper at the fold retains a radius that prevents permanent deformation of the material. In plastic, you can accomplish the same thing by slightly recessing the living hinge below the level of the mating surfaces it connects (see Figure 2). Without that recess, one of two things will happen to the living hinge when folded:

As useful as living hinges are, they can be challenging to mold and require careful attention to all aspects of molded-part design. Resin has to be able to flow through the narrow gap between mold halves that will form the hinge. This constriction at the hinge will cause increased pressure upstream of the hinge leading to flash and decreased pressure downstream of the hinge causing potential fill problems. Unfortunately, this problem cannot be addressed by gating on either side of the hinge because having two resin flows meet at the hinge would significantly weaken it.

Our quoting analysis won’t specifically recognize that a hinge in your design is in fact a hinge, but it will identify potential moldability issues that can be addressed before any parts are manufactured. Once you have prototypes in hand, you can further test the design of the living hinge before increasing to higher volumes.

As always, feel free to contact an applications engineer with any questions, at info@facfox.com.