Starting with a short and easy introduction to injection moulding; a mould used for injecting plastic comprises of atleast two parts – the core and the cavity. Cavity is usually the part that forms the external surface of the part, while core forms the inner surfaces. Let’s say we want to inject a massive U. In the picture below, the blue portion would be called the core and the maroon portion, cavity.

When molten plastic in injected into the mould at high pressure, it takes the shape of the mould. From here, it begins to start cooling until the plastic sets into one solid mass, in the shape of the free space available inside the mould. After the part has cooled down, the core comes off and the part can be taken out of the cavity.

Now let’s imagine another part, this too is a U shaped part. But the shape of the core and cavity used to make this part is different from the previous U discussed above. Over here, there is is a sideward protrusion from the maroon part of the mould.

As you can see, after the part is formed in the mould, it can become almost impossible to remove this part from the mould due to it latching onto the protruding portion of the mould. This portion is called an undercut.

At this point, it is important to discuss the concept of parting line, usually referred to as P.L. A parting line the line on the part where cavity and core meet. The line lies on the parting surface which is a plane where the core and cavity touch each other when they are in closed condition. Parting line can have significant effects on design as it is hard to control the quality and appearance of parting line over large production volumes. Additionally, many products require parting line to be kept away from touch surfaces as it can cut through skin due to its sharpness and presence of blisters.

How to identify an undercut?

An easy way to identify an undercut is to look either way from the parting line. If you are able to see all the surfaces on the inner side of the mould, there is usually no undercut. If there are some portions of the mould that are being hidden away by other parts of the mould, there may be undercuts. Just because you cannot see a portion of the mould does not necessarily mean that there are undercuts. These could just be the portions that are to be removed by hydraulic or pneumatic slides or parts that accomodate insert cores.

It is necessary therefore before you hand over a part to production, that you carefully examine the manufacturability of the part.

In real life conditions, it is not just sufficient for you to have no undercuts, but there are also requirements to add draft angles to the mould. Draft angles are small angular drafts given to the surface of the mould in the parting direction to facilitate easy removal of the part from mould. We will discuss more about this in a different article.

Parting lines on injection-molded parts are a popular topic for product designers. Accordingly, this tip covers the types of parting lines you may encounter on plastic and liquid silicone rubber molded parts, and how you can properly address them.

When you are developing a 3D CAD model to be molded, you may not spend much time thinking about where its parting line will be, but it’s worth noting because the location can affect your part in several ways. On some parts, the location for the parting line is obviously right down the middle, while on more complex parts, it may not be as obvious.

Take, for example, a simple plastic cup. The outer face is formed by one mold half (A-side), while the cup’s inner surface and brim will be formed by the other mold half (B-side). The parting line occurs along the outside edge of the brim of the cup. For other designs, parting lines vary with geometry. A molded yellow flower, which was used as an art piece for children, depicts a parting line along its outer petals (see Figure 1). 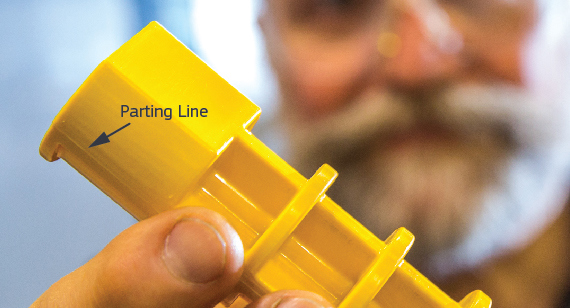 Figure 1: A parting line is present along the outer petals of this toy flower.

When a design is a complex shape, determining where the parting line will be located can be more complicated. You can assume that if you send an undrafted 3D CAD model of such a part, FacFox will determine where the parting line should be. However, in designing such a part, you might want to think about the parting line for one simple reason: Designers and molders look at parts differently. Molders share your interest in producing the best possible part, but the focus is on molding it correctly, whereas designers focus on how it will function after it comes out of the mold. The location of the parting line can affect both.

First of all, the location of the parting line determines the direction of mold opening and, consequently, the direction in which features must be drafted for easy ejection. Second, it affects where any vestiges left by the mating surfaces of the mold halves will be, and potentially, how those vestiges will look. Third, parting line location can also impact the cost of mold making and the type and cost of secondary operations needed to finish the part. 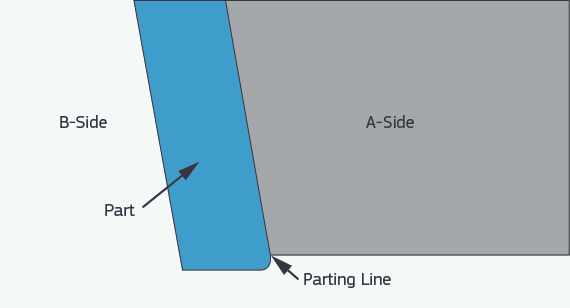 The plastic toy soldier is an obvious example of a design with a challenging parting line, but the issue can come up on simpler parts as well. For example, a straightforward geometric design with radiused or rounded edges can also be problematic. The parting line has to trace the path along which a tangent to the surface is parallel to the direction of mold opening. In Figure 2, the parting line has been placed across an otherwise smooth surface. Any mismatch in mold edges will create a fairly obvious seam, so a parting line in this location would create a need for tighter tolerances and potentially increase milling costs. The increased likelihood of flash could also impact both the cosmetics and functionality of the part, potentially making assembly of finished parts more difficult. If the parting line is instead placed along a sharp edge, the seam would be camouflaged, and the undesired manufacturing, functionality, and cosmetics issues outlined above (see Figure 3) would be avoided.

Designing parts for liquid silicone rubber (LSR) molding is similar to thermoplastic molding, though with the LSR processes, additional preparation to prevent flash should be considered. LSR flows into the mold as a liquid and will fill into gaps as small as 0.0002 in., which can result in flash. Though parting lines on LSR parts are likely less visible, and less intrusive, they are harder to prevent. You should also make sure that parting lines on LSR are not on a sealing surface. Simplifying and minimizing parting lines on LSR parts will help you get cleaner parts as quickly as possible. 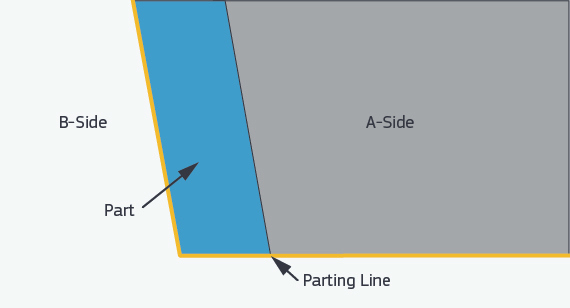 Figure 3: Both mold halves meet to form the sharp edge of the part.

Being Aware of Parting Lines

With all injection-molded parts, there are several ways to address parting line challenges. An awareness of the significance of the parting line is a good start. As stated earlier, parting line location is obvious and not a problem on many parts. For more complex parts, you may be able to use tools within some CAD packages to locate and evaluate split lines, or you can just upload a 3D CAD model online and we’ll propose a parting line and suggest appropriate draft based on that orientation. Our software may also point out that the part cannot be made in a straight-pull mold and that design changes, side-actions, and/or pickouts may be required.

Whether you get your information from a CAD package or from FacFox, keep in mind that the suggested parting line may not be your only option. Neither your CAD program nor our design analysis software knows how you intend to use the part. Look carefully at the suggested parting line and consider whether its location will work both cosmetically and functionally. If not, there may be other options for your existing design, or you may want to change the design to allow a more suitable parting line for your application. If you need assistance, you can always contact an applications engineer to discuss your design at chat widget or info@facfox.com.